SDBJJ Is The Best Choice For Martial Arts!

The rank of Rokudan has been accredited by IJF, USA JUDO, USJA, and USJF. 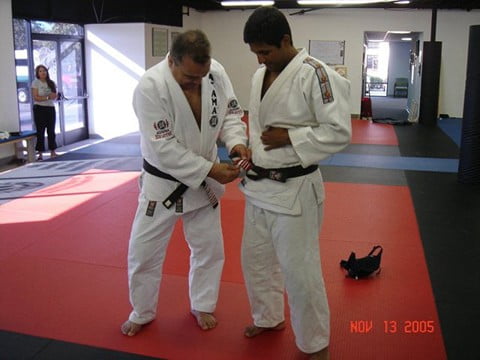 One Of Sensei Paulo Fernando’s Milestones In Brazilian Jiu Jitsu On November 14th, 2005

The late Master Carlson Gracie is a legend.  He spent his time on this earth passionately spreading Jiu Jitsu throughout the world.  Sensei Paulo was fortunate to have been influenced by Master Carlson Gracie, and to this day, still shares many of the principles and techniques that were shared with him.

Martial arts certification programs continue to play an increasingly important role in our society, it is more critical than ever to ensure that your school is operated by a professionally trained martial artist that has proof of his/her (Lineage & Certification).

This page was created to help prospective students understand the depth of professionalism held at San Diego Brazilian Jiu Jitsu.

Please take your time and peruse our Jiu-Jitus, Judo, & Professional Certifications.  You will also find a lineage diagram that takes you to the roots of Sensei Paulo Fernando’s martial arts tree.